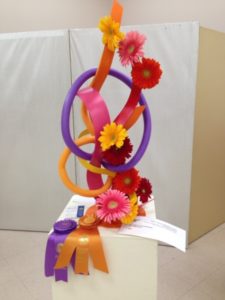 These designs were in a flower in New Hampshire a few years ago. Several of these designs received blue ribbons for their class. Please note that these photos may not be reproduced. 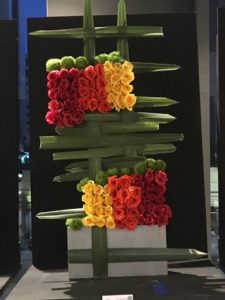 Design 2: In this design a grid was made with flax leaves. Blocks  were formed with red, yellow, and orange roses and edged with green trick dianthus. This wasn’t an easy design to assemble. This design lost points as it exceeded the size of the background, but it still earned a blue ribbon. 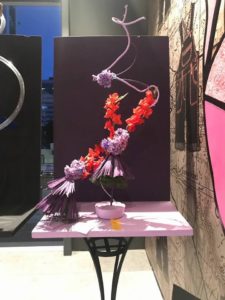 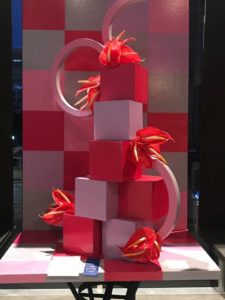 Design 3: Lavender and red contrast and fly through the space in this design. Points were taken off since the background is undersized for the design.

Design 4: Red, pink, and lavender are skillfully combined in this design. The red anthuriums are a perfect accent. It was not easy to narrow down the top ribbon in this section and this was a close second.

Rose Rosette Disease: There “Mite” Be a Problem with Your Roses by RGC Blogger Lisa Ethridge

Since its identification in 1941, Rose Rosette Disease (RRD) has slowly made its way across the country. Now it’s a national epidemic; moreover, the highest concentration of this insidious disease is the upper South, aka our own North Fulton backyards.

RRD is basically uncontrollable and deadly to rose bushes of all types. Unchecked, it can spread throughout a neighborhood and beyond. While it’s good to be aware of the problem, that’s not enough. Horticulturalists declare that without action and, yes, even activism rose “delight” will turn to rose “despair” in the coming decades.

RRD is caused by a virus which requires a minuscule mite to transfer the disease. These mites are so tiny, they literally are “blowin’ in the wind.” Besides being wind-borne, the mites can be transferred to another rose via an animal or a person—think walking your dog around the neighborhood. They can also be transferred by tools or leaf blowers. Once the mites get situated in a new feeding ground/plant, they transfer the virus to the vascular system of the plant, and infection ensues.

Be vigilant. If you suspect RRD, send pictures of an affected plant to roserosette.org/reporting. Experts will provide a diagnosis, and you’ll be part of ongoing research about this widespread disease.

Since the virus is deadly, the treatment is severe. Pruning is not an effective defense. Experts recommend covering the affected bush w/a garbage bag, securing it, then digging up the root ball. The entire plant must be thrown in the garbage can. Do not replant the area with roses. Replace the plant with another specimen that will thrive in a sunny location.

Become an RRD activist. Spread the word—not the disease. 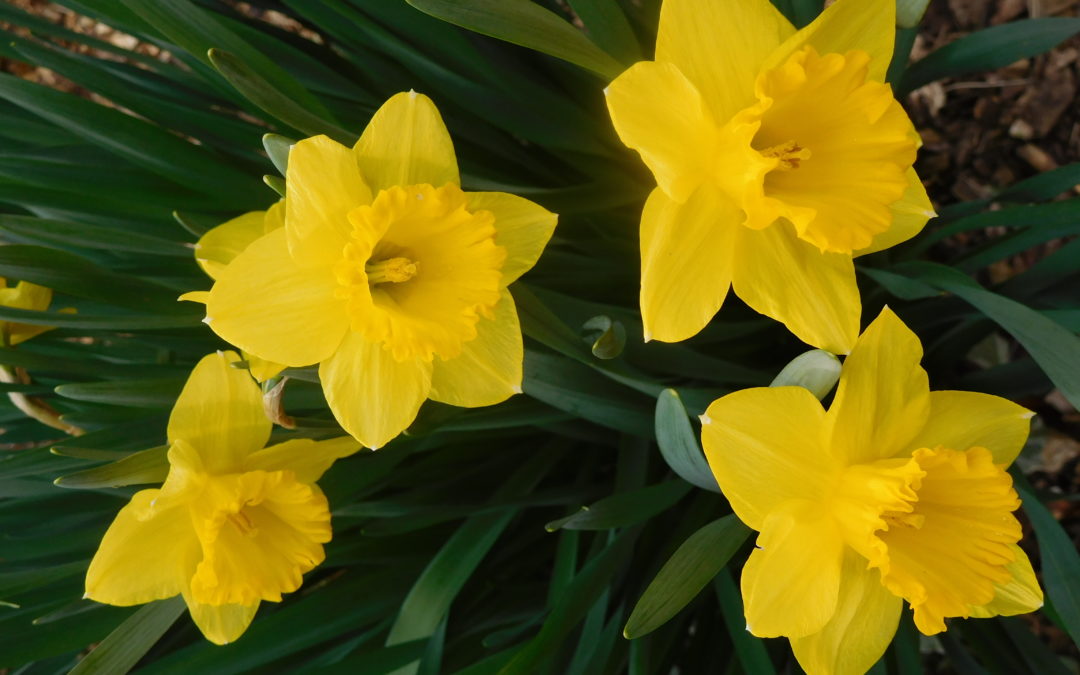 It’s Almost Time to Plant Daffodils and Other Bulbs

Daffodil/ Narcissus General Information
Daffodils are especially long lived and they multiply. Daffodil /Narcissus is the most widespread genus.
Gardeners have plenty of colors, shapes and sizes to choose from. Yellow trumpets are just the tip of the iceberg when it comes to daffodils. There are white daffodils with pink cups, yellow daffodils with orange cups, miniature daffodils, double daffodils, split corona daffodils and many more. You can’t go wrong with these cheerful flowers.
Quotation from Homer sometime between 12th and 8th century B.C OMG 
“The Narcissus wondrously glittering, a noble sight for all, whether immortal gods or mortal men; from whose root a hundred heads spring forth, and at the fragrant odor therof all the broad heaven above and all the earth laughed, and the salt wave of the sea.” Homer: Hymn to Demeter
Fascinating History
Centuries before Homer, flowers of this species were used by the Egyptians in funeral wreaths and have been found in tombs well-preserved after 3000 years. According to legend, this flower, originally white, was turned yellow by the touch of Pluto when he captured Persephone sleeping with a wreath of them on her hair. According to Pliny the plant was named Narcissus because of the scent: Narce=narcotic. The myth of Narcissus came later. Early on, the yellow species was called “Affodyl” and “Daffadowndyllyes.”
The first daffodil show was held in Birmingham, England in 1893. Since then, the daffodil has become one of the world’s most popular flowers. It is the national flower of Wales and the birth flower for those born in the month of March. The Georgia Daffodil Society holds its annual show at the Chattahoochee Nature each March.
Easy Planting
Dig a hole at least 6” deep. Place two bulbs pointy side up in the bottom of the hole. Add a tablespoon of bone meal for good measure. Replace the dirt and then water.
*If you are confused about the right planting depth for flower bulbs, trust the bulbs. Researchers have discovered that some flower bulbs, like daffodils, adjust themselves to the right planting depth. “Contractile roots” are responsible for bulbs’ movement. Daffs are even phototropic. They “right” themselves and grow towards the sun even if you plant them upside down or sideways.
Easy Care
In the spring, enjoy the blooms and let the foliage fade and disappear naturally. Do not cut the tops or fold them. The tops feed the bulb so it can bloom the next spring.
They will multiply, so divide as needed and share w/friends. 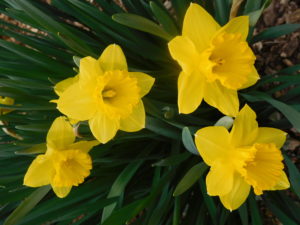